A rich time-obsessed Englishman, Phileas Fogg, takes a challenge he is sure he will win, while everyone else deems it impossible. He grabs his French servant and embarks on the most absurd, well put together and exceptionally funny stage adaptation of “Around the World in 80 Days”, now playing at International City Theatre in Long Beach. This well-renown Jules Verne novel is now a play by Mark Brown, and it features a true farce of an adventure as Fogg sets out to prove that a person can in fact travel around the world in 80 days. This production is filled with more quick changes than you have ever seen before and on opening night they nailed every single one of them. However, be at peace, for these performers are well trained in improve and if anything does go wrong, such as facial hair falling off during a scene, they take it and run, working it right into the hilarity that is the context of the play.

Full of somersaults, slap stick, prat falls and everything that has been in the theatre since Vaudeville, this play has something for everyone. Each actor, except for Jud V. Williford who plays the venturing Fogg, plays a dozen roles at least and they act all of them superbly, with absolute no overlap of expression, gestures or accents, which there are dozens. Each actor is so phenomenal that I must highlight all five of them, which is something I do not normally do.
Williford plays the straight man to the entire cast. His Fogg is direct, concentrated, determined and he never lets any of the highly absurd situations dissuade him from his plans. Michael Uribes cartwheels his way into your heart with his rendition of Fogg’s servant as well as other whacky loveable characters. Brian Stanton has mastered the art of stair pratfalls and though he features it throughout the play it never gets old, he keeps it fresh, which is a real talent. Mark Gagliardi is one of the most versatile character actors around. He plays multiple characters within two minutes of each other and never misses a step. The lone female of the cast, Melina Porto is perfection. From her long faced Chaplin-esque butler, to her enchanting Indian princess. The entire cast is superb and their stellar talent alone makes it worth seeing this show. 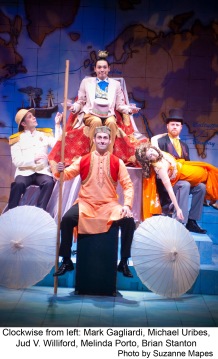 To rein in a cast of this talent is a feat in itself,  but the staging of this play is just as important as the level of acting you must find. Director Allison Bibicoff has taken this madness of a play and presented it to its full potential. Bibicoff obviously has a talent for directing and her presentation of this play could very well be remembered throughout the year and be in the running for many “Best of” lists. I don’t say this much, but this production is a MUST SEE. So head down to Long Beach and thank me later.

“Around the World in 80 Days” plays through February 17th.