I grabbed a blanket and settled into the intimate, not heated but constantly growing Little Fish Theatre (LFT) in San Pedro. Nestled amongst quaint restaurants is this little theatre which recently expanded their space, allowing more room for audience and performance. This was my first time to LFT, but after watching the opening night of “Pick of the Vine” it will definitely not be my last. 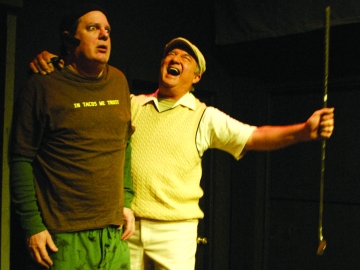 For the past eleven seasons, LFT has been selecting original short plays from several submissions and presenting them in “Pick of the Vine”. I may not be able to speak about previous years but this year their selections are superb. The eight short plays are all packed with laughs, originality and heartwarming moments. Only one of the eight seemed lack luster to me, and that was because I felt that the subject of “The True Cost of Heavenly Birth Insurance” was more suited for a full length play than a small blurb of a piece.
The actors who present these eight plays are honest and full of energy, they are a true ensemble without a weak link in sight. Some have but minutes to change into different characters and they all do it beautifully. The topic of plays range wide, from a gun-toting God trying to change a life-wasting human,  to victims of 9/11 leaving their last voice messages on their loved-ones’ machines, to third graders preparing for the last game of their losing softball season. There is something for everyone, and it is pretty much guaranteed that at one point or another you will be crying, either because of a touching moment or because of how much you are laughing. 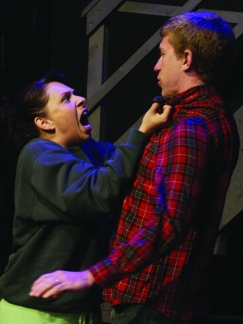 Rachel Levy and Craig Shields in “A Name” by Mark Cornell, directed by Bill Wolski — one of eight short plays in Pick of the Vine, now playing through Feb 16 at Little Fish Theatre. **

LFT obviously has perfected the art of picking great plays and the venue is filled with wonderful and welcoming people. If you haven’t checked out Little Fish Theatre  then you must, for the theatre itself is the ultimate ‘Pick of the Vine’.

“Pick of the Vine” runs Fridays and Saturdays through February 16th with select weekday performances, check their website for details.