So many must sees!!!

“The Agony and the Ecstasy of Steve Jobs” – Runs Wednesdays Till Apr. 10th – Theatre Asylum – Hollywood
My Night Musing

“On The Spectrum” – Runs Till Apr. 28th – The Fountain Theatre – Hollywood

So many great options this week!!!

“The Agony and the Ecstasy of Steve Jobs” – Runs Wednesdays Till Apr. 10th – Theatre Asylum – Hollywood
My Night Musing

Having enjoyed my first experience with Antaeus‘ current production I decided to go back and check out the Sycamore cast of “you CAN’T take it WITH you”. After seeing both casts it is easy to say that no matter which day you go to see this play you will walk away with a pleasant feeling.

Each actor seems to have a grasp on their character, yet it is clear that everyone has their own take on their own characters. Each cast brings their own nuances to their roles, making them slightly different than the other cast’s but still true to the written role. For example Eve Gordon of the Sycamore cast plays a much more inhibited Penny Sycamore then Julia Fletcher’s outrages kooky Penny. Both are loveable and great to watch but they are slightly different takes on the roles.

If I had to pick a stronger cast I would say the Kirby cast, however I do not think picking favorites is fair. The first cast I saw was the Kirby cast, therefore I associate the roles with those actors, which is not fair to the Sycamore cast. I do feel that both casts have melded together well and bring this true ensemble piece to its comedic best. No matter which cast is playing I will highly recommend this production, and can guarantee that laughs will be had.

The Antaeus Theatre is well known for putting on the great classics which they always double cast, giving audiences multiple ways to enjoy their productions. Currently they bring in a lighter side of great theater with their production of you CAN’T take it WITH you. Written by the well know comic playwrights Kaufman and Hart (The Man Who Came To Dinner), this hilarious romp crosses the downright odd Sycamore family and the industrious Wall Street tycoons the Kirbys in a love struck tangled web.

Sitting down in the small theater you are immediately transported into the wacky household that belongs to the ballet dancing, snake collecting, play writing, portrait painting, firework making, press printing, song writing family that is the Sycamores. With a skull candy jar, an elephant head, a toy boat just to name a few, the house is perfectly decorated for the play and it sets the mood immediately. Tom Buderwitz has done a wonderful job at capturing the spirit of the play and the house, which becomes just as much a character as any of the actors.

The direction of this play has to be firm and yet flexible enough to allow the playfulness of the actors to shine through, and Gigi Bermingham did just that and more. The staging is of the utmost importance. With Essie (Linda Park) constantly dancing around in people’s faces and leaping across the set at any given moment, the comedy of the piece requires that everyone be in perfect synch with her and the others. Every moment counts in this piece and it is all set perfectly to impromptu music played by Essie’s wacky husband Ed (Michael Hyland). The quick changes and re-setting of scenes after intermission is part of the perfect comedic timing Antaeus has been able to bring to this piece. Without it, the play would be a complete disaster and not funny at all. 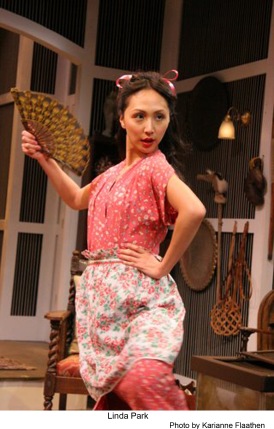 As with all Antaeus productions this play is double cast. I had the privilege of seeing the Kirby cast. Each actor held their own with the fast paced hilarious script and the cast was delightful during this opening run. They were led by no one in particular since this play is very much an ensemble piece. No one person stands out and that is the way it is supposed to be. In a play where the importance of family is key the cast should be presented as a strong inseparable family. you CAN’T take it WITH you is an absolutely absurd and extremely well presented play. It will have you laughing your head off and will give you a smile that you can in fact take with you.

*Please check the Antaeus website for a schedule, casts alternate every performance.

Walking into the tiny Antaeus Company’s theater in North Hollywood, you are immediately transformed into the dark and Shakespearean world of Scotland. Tom Buderwitz has beautifully designed the set of Macbeth, which makes great use of Antaeus’ small stage. With parts of a castle and blood tipped trees spaced throughout the stage, the set is never changed but is used flawlessly as both the inside of the castle as well as various outdoor settings. The rather large cast is cleverly staged in order not to overwhelm the space. With four exits and entrances, everyone is perfectly timed so there is never a missed beat nor too many characters on stage.

Overall the direction of this play, by Jessica Kubzansky is wonderfully done. Kubzansky has allowed the actors to make the roles their own. Though she has done her own interpretation of this classic, without losing its Shakespearean nature.

Antaeus is a theater company that specializes in the classics. They also specialize in being extremely unique. All of their productions are double cast. Therefore if you go see Macbeth on Saturday and then again on Sunday, you will see two completely different casts. Also if you go on Thursday or Friday you will see a jumble of both casts, so there is always something new and refreshing every night. 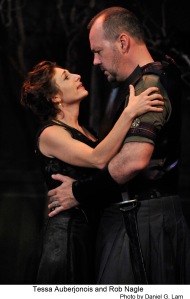 I was very impressed with this production as a whole. I saw the “Thanes” cast, which is led by Rob Nagle (Macbeth) and Tessa Auberjonois (Lady Macbeth). In the opening scene both Nagle and Auberjonois brought tears to my eyes with their heart wrenching, agonizing funeral for their newborn baby. Throughout the rest of the play their range of emotions along their paths to utter destruction and turmoil are brilliantly played.

Jessica Olson has also done an imaginative and stunning job with the costumes of this production. Bringing in the Scottish styles of Kilts and clan colors, while still making them look modern and flattering. The dresses worn by the women are modestly stunning and very elegant. It can not be an easy feat to costume two casts, but by the example I saw, she has done a wonderful job. 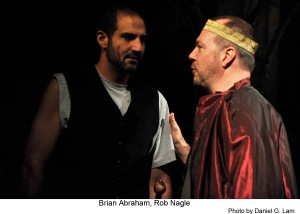 This fabulous production of Macbeth runs through August 26th. Though I cannot yet comment on the quality of the “Kinsmen” cast, I am going out on a limb and speculating that they are probably very talented. After seeing this production I am very impressed by the Antaeus Company and have high hopes for their future productions as well as their other cast of Macbeth. If you are a fan of Shakespeare or classic theater in general then this is a must see for you.

Check the Antaeus website for a complete calendar of cast performances.