Sometimes there are shows that you hear about and they are so intriguing that you decide you must see it. Then, as the years go by and you finally get the chance to see it, you are built up with so much excitement and expectation that the show will probably never live up to what your mind has concocted. However, the handspring puppet spectacular War Horse not only lived up to all of my expectations, it surpassed them with flying colors. This is a stunning visual piece, but it is also an emotional ride that captivates the entire audience. Nearing the end of its almost two month long run at the Ahmanson, the theater was still completely packed, and almost the entire theater seemed just as captivated as I was.

I would hate to spoil any of the heart wrenching/warming and nail-biting moments that take place during this production, so I will do my best to be vague, and yet still make my point. There are several places during the evening where the audience audibly gasps together as we all fear the worst will happen. There are also moments where we all break into relieved and excited applause in unison, as if we have some actual connection to the life of the puppet horse on stage. 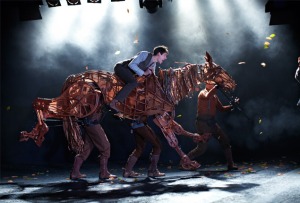 The creators of this show, alongside South Africa’s Handspring Puppet Company have done a marvelous job at bringing the horses, especially the main horse, Joey to life. Even though the three puppeteers (Christopher Mai, Derek Stratton and Rob Laqui) that man Joey are completely visible and are dressed in period garb, just like any other character. After a short while they become part of the horse. The horse comes to life and has just as much personality as his beloved owner Albert (Andrew Veenstra) does.

The five-time Tony Award Winning War Horse has been adapted from the novel written by Michael Morpurgo. It follows the story of a young man, Albert, who becomes responsible of raising a horse who he names Joey. After growing attached to Joey, Albert’s drunk, money hungry father sells him to the army. Driven by love and naivety, Albert flings himself after his horse and through the bloody trenches of war, hoping he will find Joey alive.

War is never pretty to watch, and to see what horses went through during the First World War is even less pretty, especially for those who are avid animal lovers. However, this is a visually pleasing show. Between the horses, puppet birds and the projector they use  on a white screen on the back of the stage, everything is brilliantly portrayed.

The transition between the cavalry and tanks and machine guns, becomes a subplot of the story, as Joey maneuvers his way through different jobs during the war. It climaxes when the lone horse comes face to face with a tank; visualizing the moment where the need for horses in war has become obsolete.

Ultimately, this is a love story. A lost and hopefully found love story that is beautifully told.

I will truly say that I can never recommend a show more than this one. I am an avid lover of small theaters and small productions but sometimes, big masterful pieces of work steal my heart and this is one of them. War Horse is an enchanting evening and one that you must experience. Though there are only three more performances here in Los Angeles this show is continuing on its national and international tour. They will be returning to Southern California in January and I hope to see you there. Trust me, this is a night of theater that is not to be missed. Theater is meant to transport one to another time and place, and to tell a mind-fulfilling story. War Horse does just that and so much more.